The Intergovernmental Panel on Climate Change (IPCC) in its 5th report from 2014, points out that the climate is changing globally, leading to higher atmospheric and ocean temperatures, sea level rise and a change in general weather patterns.

Globally the sea level is to rise between 0.4 m and 1.0 m (IPCC5-Chapter 13, page 1181), threatening to flood low lying coastal areas. This is of concern as currently about 40% of the world’s population are living within 100 km of the Earth’s ocean’s coasts and many key economic infrastructure is located there.

Further, for Southern Africa, an increase in ocean storm frequency and intensity is expected. This will lead to an increase in storm surges, exacerbating the risk of flooding specifically of low-lying coastal areas, putting livelihoods and coastal economies even more at risk.

The National Oceans and Coastal Information Management System (OCIMS): Coastal Flood Hazard tool gives a first indication on which areas are at risk of flooding. It can be used for populated areas but also for currently undeveloped areas to assess whether future development might be at risk.

The online tool currently has two offerings based on the bathtub model : continuous flood-lines and 4 sea level rise scenarios based on the IPCC projections. The data coverage of the tool is illustrated in Figure 1. A third offering based on more rigorous dynamic flood models is in progress. The hydrodynamic modelling datasets are meant to be the result of collaborative efforts with other South African municipalities and flood modelling experts. 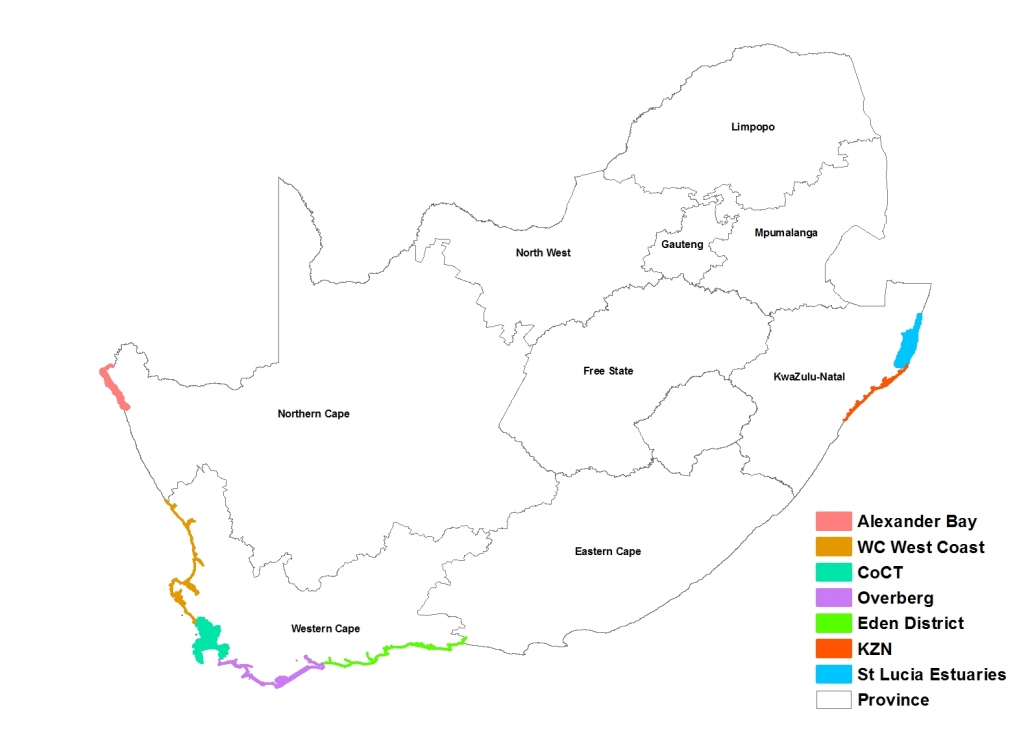 The National OCIMS is the result of collaborative partnerships led by the Department of Environmental Affairs and managed by the Council for Scientific and Industrial Research. The project has drawn from the expertise of government, labour, business, academia and other sectors. It serves under the premise of Operation Phakisa a national government project.

Bloom Season is on its Way: What You Need to Know Bilge Dump System

This site uses cookies. By continuing to browse the site, you are agreeing to our use of cookies.

We may request cookies to be set on your device. We use cookies to let us know when you visit our websites, how you interact with us, to enrich your user experience, and to customize your relationship with our website.

Click on the different category headings to find out more. You can also change some of your preferences. Note that blocking some types of cookies may impact your experience on our websites and the services we are able to offer.

These cookies are strictly necessary to provide you with services available through our website and to use some of its features.

Because these cookies are strictly necessary to deliver the website, refuseing them will have impact how our site functions. You always can block or delete cookies by changing your browser settings and force blocking all cookies on this website. But this will always prompt you to accept/refuse cookies when revisiting our site.

We fully respect if you want to refuse cookies but to avoid asking you again and again kindly allow us to store a cookie for that. You are free to opt out any time or opt in for other cookies to get a better experience. If you refuse cookies we will remove all set cookies in our domain.

We provide you with a list of stored cookies on your computer in our domain so you can check what we stored. Due to security reasons we are not able to show or modify cookies from other domains. You can check these in your browser security settings.

These cookies collect information that is used either in aggregate form to help us understand how our website is being used or how effective our marketing campaigns are, or to help us customize our website and application for you in order to enhance your experience.

If you do not want that we track your visit to our site you can disable tracking in your browser here:

We also use different external services like Google Webfonts, Google Maps, and external Video providers. Since these providers may collect personal data like your IP address we allow you to block them here. Please be aware that this might heavily reduce the functionality and appearance of our site. Changes will take effect once you reload the page.

The following cookies are also needed - You can choose if you want to allow them: